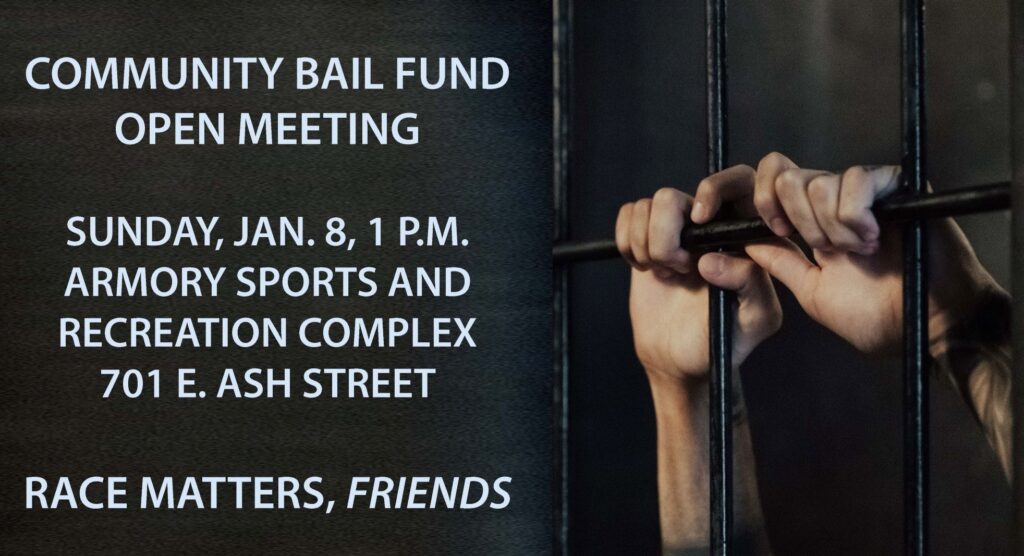 Columbia, MO, Jan. 2, 2023 -- Race Matters, Friends (RMF) will evaluate one of its core strategies for combatting the police-industrial complex by hosting a Community Bail Fund meeting. The public is invited to attend the open discussion at 1 p.m. Sunday, Jan. 8, at the Armory Sports and Recreation Center, 701 E. Ash Street. Refreshments will be provided.

The cash bail system preys on poverty and traps community members in a downward spiral away from family members, jobs and support. RMF’s targeted response to unjust imprisonment in Boone County has been to help selected county residents accused of minor charges bail out of jail. Many incarcerated residents can’t afford to pay bail, or even 10% to a bail bond agent. They might be in jail for weeks for the simplest offense, seriously jeopardizing their ability to earn a living or care for their families. RMF will remain focused on eliminating the cash bail system until Boone County stops using its jail as an answer to problems of poverty, addiction, mental health or similar societal issues.

“RMF’s Bail Fund has been operating for almost four years and paid approximately $300,000 in bail, yet the system has not changed. The system just takes our community’s money and keeps incarcerating people for poverty,” says Peggy Placier, leader of RMF’s Community Bail Fund. “In the meantime, RMF volunteers continue to bail out their neighbors, raise money, educate judges and advocate at the jail. Our work has been successful in helping many individuals, but it is also propping up an unjust system rather than stopping it.”

RMF pays 100% of bail up to $3,000 for selected Boone County Jail ­­­­­­detainees. It also provides these detainees with rides, court information and court case date reminders. When a case is completed, RMF eventually receives a partial payment refund (minus fines and fees) from Boone County. Donations help RMF bridge the gap between payments and refunds.

The Jan. 8 meeting will include a public input and discussion period from 1-2:30, followed by an open strategy session from 2:30 to 4. More information about supporting RMF’s Community Bail Fund is available at